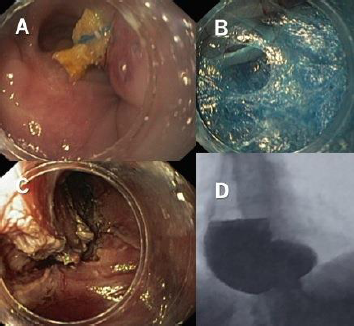 Figure 1. Successful POEM after three failed Heller in a 62-years-old female with sigmoid type II achalasia and mega-esophagus. A) Dilated esophagus and suture from previous Heller and gastropexy. B) Submucosal tunnel and suture in the tummel. C) Myotomy. D) Rapid passage of contrast medium after POEM. Two years later she is totally normal. 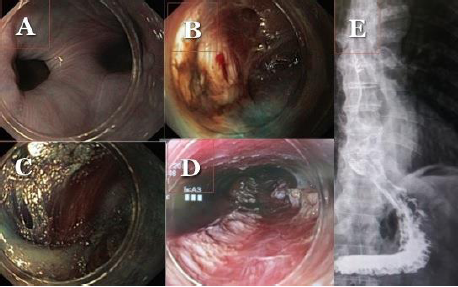 Figure 2. Successful POEM (2018) in 79-years-old male with spastic type III achalasia and multiple large esophageal diverticulums: A) Orifices of esophageal diverticulums in the middle esophagus from esophageal lumen during POEM. We recognize the blue dye. B,C) Submucosal tunnel. We recognize the thick muscle layer and the orifices of the diverticulums within the submucosal tunnel. D) Long myotomy length up to 22cm. E) Esophagogram the same afternoon after POEM, showed rapid passage of the contrast medium (gastrographin) to the stomach. Two years later he is totally normal. 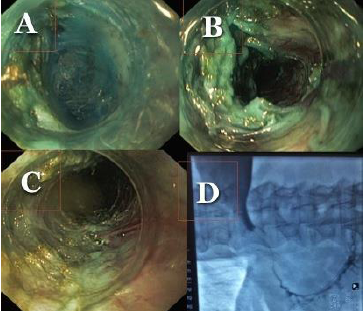 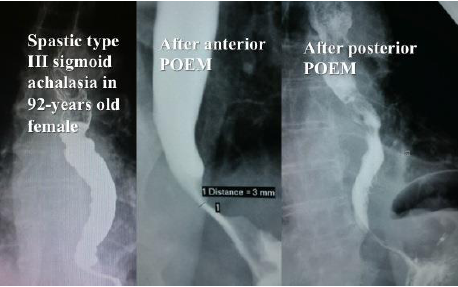 Figure 4. Esophagogram of 92-years-old female with spastic type III achalasia before and after anterior and posterior POEM in 2015. Rapid passage of the contrast medium after POEM. Five years later she is totally normal.

PerOral Endoscopic Myotomy (POEM) has been considered the most modern, innovative, minimal invasive, without scar, bloodless and painless long-term treatment for all types of esophageal achalasia, and other esophageal motility disorders (diffuse esophageal spasm, nutcracker and jackhammer esophagus), with short hospitalization (in Dr Nikos Eleftheriadis’ case series only one day in-hospital) and rapid recovery.

POEM performed during a simple gastroscopy, patients mobilized soon after procedure, starting drinking the same day, and return to all their daily activities directly within a few days.

One of the major advantage of POEM technique is the longest myotomy length, achieved by POEM up to 25 cm, (mean myotomy length in Dr. Nikos ELEFTHERIADIS’ series is more than 15 cm, maximum 24cm), which is practically impossible with any other method. 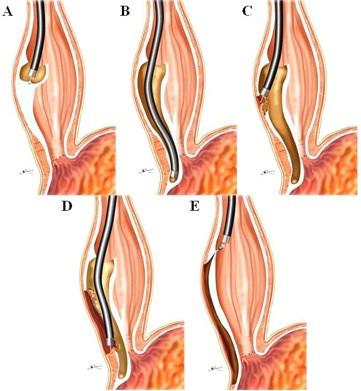 Figure 1. Schematic POEM stages: Α. Mucosal incision and entrance to submucosal space Β. Submucosal tunnel. C. Selective circular myotomy inside the submucosal tunnel. D. Completion of myotomy up to 2cm below the GEJ at the gastric side. E. 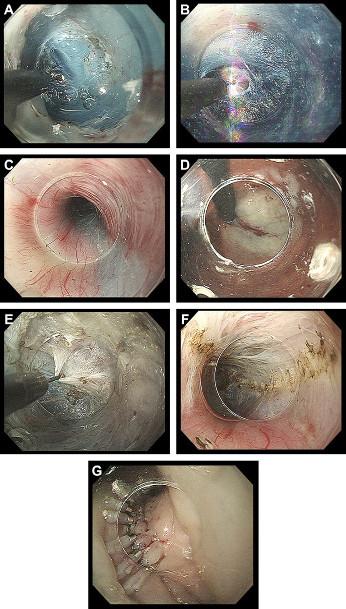 Figure 2 A-G. Stages of anterior POEM: (A) Longitudinal mucosal incision at the 2nd hour. (B) Submucosal tunnel. (C) Identification of EGJ inside the tunnel (palisade vessels). (D) Blue dye is recognized at retroversion in the gastric cardia (E) Selective circular myotomy is performed using TT-knife. (F) External longitudinal muscle layer is recognized at the back of the myotomy side. Longitudinal muscle fibers split each other. (G) Mucosal entry closing by clips at the completion of myotomy.
Another important advantage of POEM in contrast to all previous treatments, is that it can be succesffully applied without exceptions even to advanced types of achalasia, with megaesophagus, and also to debilitating elderly patients with high risk of surgery, such as in several of Dr. Nikos Eleftheriadis’ cases.
POEM can be also successfully applied after failure of previous therapies, such as surgical or LHM myotomy or balloon dilatation. In these cases POEM provide a long-term solution.
Many of Dr. Nikos Eleftheriadis’ achalasia patients, underwent successful POEM and solved their problems in long-term, after failure of both previous repeated balloon dilatations and surgery. In these patients POEM was practically the only realistic therapeutic option available.
Another important advantage of POEM, is that no anti-reflux procedure is necessary, because during POEM the normal antireflux mechanisms remain intact, due to internal access through the submucosal tunnel. In contrary, in surgical or LHM myotomy, the normal antireflux mechanisms were disrupted due to access the esophageal muscle from outside and so antireflux procedures are usually necessary, if not in all cases. Moreover, antireflux procedures may be also related to difficult complications.
Prognosis of achalasia is much better, if early diagnosis and immediate application of POEM is performed, before complications occurred, such as esophageal dilatation, megaesophagus or sigmoid esophagus.
Personal experience of Dr. Nikos ELEFTHERIADIS from POEM is in accordance to international data and proved the safety and efficacy of POEM technique as radical long-term treatment of all types of achalasia, including end-stage sigmoid type achalasia, on Endoscopy Department basis.
The POEM stages are shown in figure 1. In figure 2 the POEM stages from a patient of Dr. N. Eleftheriadis with achalasia type II are shown.

Pharmacologic treatment for esophageal achalasia includes nitrates and calcium antagonists, however with only temporary and unsatisfactory effect, often with troublesome side effects Noninvasive, first line endoscopic treatments are botulinum (Botox) toxin injection and esophageal balloon dilatation. Botox provide inferior results and should be reserved for temporarizing therapy before radical procedure, or for patients who are poor candidates for surgery,Endoscopic balloon dilatation temporarily relieves dysphagia but is associated with higher risk of esophageal perforation (2.5%), has frequent recurrences, often requires multiple treatments and has a lower success rate than surgery.

The oldest surgical Heller myotomy (1913), which is known for more than 100 years, but also the more recent laparoscopic (LHM) myotomy, are so aggressive and invasive, because they require both thoracotomy and abdominal incision to approach the esophagus, that practically make them prohibitive in terms of risk.

In conclusion, POEM is considered safe and effective ‘gold standard’ therapy of choice for all types of esophageal achalasia and all other esophageal motility disorders. Substantially POEM has been established worldwide and appears to have replaced all prior treatments of achalasia.

I am available to you all times to help and give solution to: ‘Achalasia’ with endoscopic myotomy - POEM technique, to reflux disease (GERD) and Barrett esophagus with antireflux mucosectomy (ARMS), to early gastrointestinal (GI) cancer (early cancer of the stomach and large bowel) with ESD technique, to Zenker diverticulum with myotomy (diverticulotomy) and in biliary diseases with ERCP. 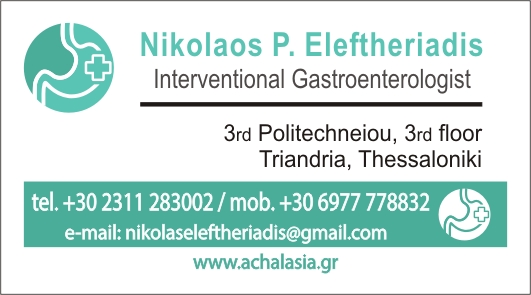 © 2018 Achalasia. All rights reserved- Created and hosted by Multihosting